FOCUS and Statista determined the 2018 growth championship in autumn 2017 and we are proud to say that MA Trading is one of the fastest growing companies in Germany.

Why were we nominated for the Growth Champion?

Companies that meet the requirements of FOCUS and Statista are awarded. Since its founding in 1999, we have been working on developing and expanding. Since 2002, we have been negotiating with business partners in the Asian metropolitan area. By 2005, we had tripled storage capacity. Over the years, successful brand names such as Baby Vivo, SAMAX, and many more emerged. The number of employees also increased significantly from year to year. Other countries were quickly included in our delivery area and our range increased enormously. Despite our steadily growing company, we managed to double our sales in 2014 compared to the previous year. 2016 was the year with the strongest sales to date, which allowed us to be selected as Growth Champion 2018.

We are very pleased to receive such an award and use it as a motivation for the coming years. When a company grows, this does not only affect the company itself, but also has a positive effect on the entire economic system in Germany. We will of course stay on this course. Numerous innovations are planned for 2018 and thanks to our loyal customers, we are confident we will achieve our goals.

There is no minimum order value. You can order any available product directly

The shipping to a German delivery address is FREE OF CHARGE. An island surcharge of 14,95 € will be charged for delivery to German islands. The exact shipping costs will be listed in your shopping cart.

Our products can only be delivered to the following countries: Austria, Netherlands, Belgium, Denmark, France, Great Britain, Italy, Spain, Slovenia, Luxembourg, Poland, Czech Republic, Estonia, Lithuania, Latvia, Sweden, Portugal, Ireland, Finland and Greece. The shipping costs relate to the respective country of delivery. The exact shipping costs will be displayed to you in the order process. Additional charges may apply for delivery to islands. For larger quantities, please contact our Service Team. 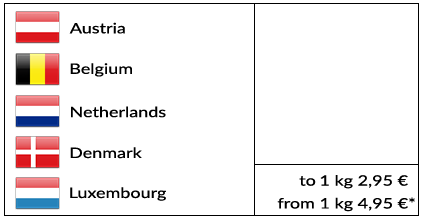 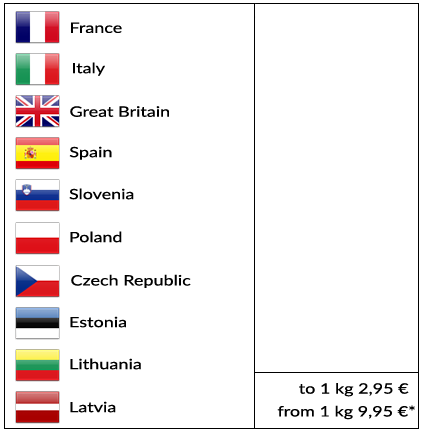 Ship to a different delivery address?

During the ordering process, you have the option of specifying a different delivery address. Please note that shipping is only possible to the countries listed above.